Sojourner Truth: If she can, I can!

Every student in America is familiar with the names of Thomas Jefferson, James Monroe, John Hancock, George Washington…etc.  The Founding Fathers inspire us. Thomas Jefferson’s Declaration of Independence was ground breaking in both breadth and scope for the individual.

“We hold these truths to be self-evident, that all men are created equal, that they are endowed by their Creator with certain unalienable Rights, that among these are Life, Liberty and the pursuit of Happiness.”

As self-evident as these truths were, many continued to suffer in bondage. As we walk down the path of life suffering comes to us all, but we don’t have to live in bondage.

Selfishness tempts us to narrow our vision, and forget the great women, who came before us that fought for many of the freedoms we now enjoy.

When I need inspiration, I look to Sojourner Truth. 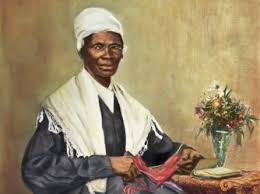 Born a slave in 1797, Sojourner endured untold emotional, physical, and sexual abuse. Although, she lived isolated from other African-Americans in New York, her many conversations with God led her to take a walk of faith to freedom. Her first action as a freed woman was to sue a white slave-owner, Solomon Gedney! He had bought her son illegally. She is the first African-American woman to sue and win! She got her son back.

What makes Sojourner an example to those who suffer is how Christ worked in her heart to rid her of bitterness and unforgiveness. Because she forgave those who hurt her, she spoke with dignity and righteousness as opposed to vengeance. She became an itinerant preacher calling all to repentance and for the equality of all.

“When she arose to speak in their assemblies, her commanding figure and dignified manner hushed every trifler into silence. (pg. 113-114).”

Her famous speech “Ain’t I a woman?” should be mandatory reading for every student (pg. 131-135). During a suffrage meeting in Ohio of 1851, a heckler left the white women invited to give the address speechless. After standing up to her full height of six foot, she took command of the audience against “Dat man ober dar” who said “dat women needs to be helped into carriages, and lifted ober ditches.” She reminded the audience that no 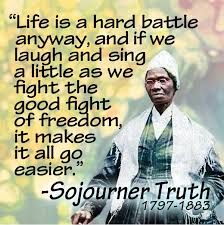 man had showed her deference by helping her out of a carriage or over ditches or gave her the best place. Truth pulled up her sleeve barring her strong arm, and in a voice “like rolling thunder” she commanded them to “Look at me! Look at my arm! . . . I have plowed, and planted, and gathered into barns, and no man could head me—and ain’t I a woman? I could work as much and eat as much as a man, when I could get it, and bear de lash as well—and ain’t I a woman? I have borne thirteen chilern, and seen ’em mos’ all sold off to slavery, and when I cried out with my mother’s grief, none but Jesus heard me! And ain’t I a woman?”

My favorite quote is in defense of Eve “If de fust woman God ever made was strong enough to turn de world upside down all alone, dese women togedder (and she glanced her eye over the platform) ought to be able to turn it back, and get it right side up again! And now dey is asking to do it, de men better let ’em. Bleeged to ye for hearin’ on me, and now ole Sojourner han’t got nothin’ more to say.”

The more I read about Sojourner Truth’s life the more convinced I am of God’s goodness and His plan for salvation and restoration for every soul in bondage.

Thomas Jefferson may have written words proclaiming freedom for all, Sojourner Truth lived it out. I have not suffered even a fraction of a fraction of affliction as this great woman, and if she can believe in God’s goodness, then why should anything hold me back? 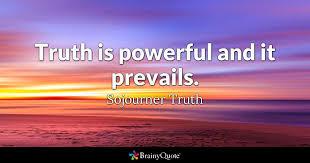 1 Comment on “Sojourner Truth: If she can, I can!” 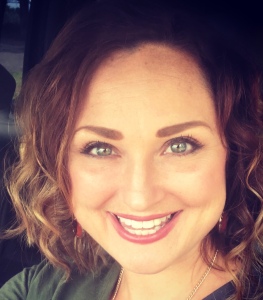 Matthea, mother of five, has served along side her pastor husband, Jon, since 2003. They are currently serving in Birmingham, Alabama. She has a heart for the local church both in the US and globally. Her passion is to see people set free from bondage through her work in Women’s Ministry, Celebrate Recovery, Living Bread Ministries, and Flourishing Faith Designs. 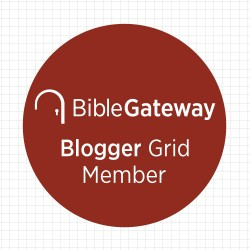 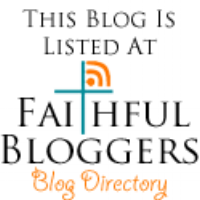